The location of the church is set after long debates and is chosen for its easy access taking into account existing land roads at the time. The required land for the church was given by a local wood merchant, Samuel Waterford Woodward.

The first church was completed in 1858, a series of eight paintings, executed by Roman artist Cesare Porta between 1870 and 1880, were purchased. They are still present inside the actual church.

A three-bell carillon, cast in France but purchased in Belgium, at a cost of 1 500$, was installed in the belfry. The new church was blessed on May 29, 1893 by Bishop Elphège Gravel, of Nicolet.

In 1948, the building was again repaired to correct structural weaknesses. In 1984 and 1985, the interior and the exterior of the church were repainted. A new fibreglass steeple was installed to replace the old one, made of timber and covered with sheet-metal, believed too heavy for the structure while doors and windows are replaced and a new narthex is laid out.

The actual organ is the third instrument owned by the parish. The first one was purchased in 1871; the second one, a Mitchell organ, was installed in 1878, but it was partially destroyed in the 1890 fire. The same year the churchwardens decided to purchase the new organ in the new church. The new instrument included part of the pipework salvaged from the fire. 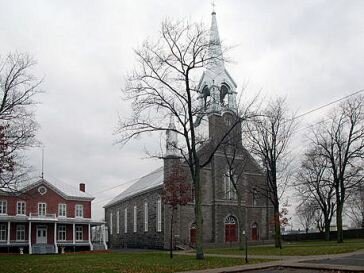