After the Conquest by the United Kingdom, the French-Canadians, although numerically in the majority, were in a minority situation with respect to their political and economic power in Quebec.

Consequently, it is understandable that they retained an abiding attachment to their cultural heritage which became landmark for their social identity as a community. Buildings such as the Church of Saint-Paul-de-Joliette demonstrate just how persistent the traditional Quebecois style was in the first decades of the 19th century.

The construction of the Saint-Paul-de-Joliette dates back to 1803-1804. It was built according to the plans of Michel Gosselin and Pierre Conefroy.

A local stone, roughly hewn, has been employed here which imparts to the surface of the stonework a relatively smooth unarticulated surface. There is no noteworthy feature such as the framework around the windows or doorway to liven up the façade, despite the finer stone and the presence of Doric pilasters at the entrance.

The original interior, of which a few features remain today, was produced between 1821 and 1830 by Chrysostome Perreault and Pierre Guibord. It was completely redone in the second half of the 19th century. Most of the sculpting was renewed towards the end of the 19th century. 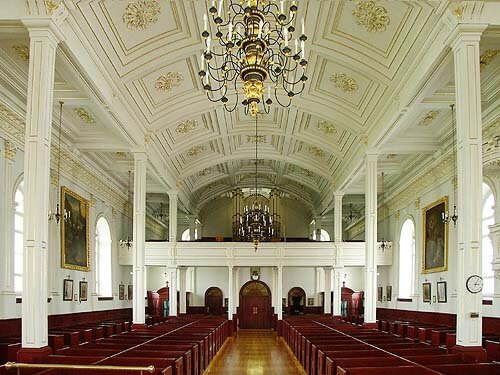