The cathedral Ste.Therese d'Avila in Amos is one of the most ambitious achievements in terms of religious architecture in Quebec.

Its architect, Aristide Beaugrand-Champagne, designed the cathedral in 1922-1923. He showed great daring by using reinforced concrete to protect the enormous church from forest fires.

He also introduced in Quebec a Roman-Byzantine style, hitherto unknown in a northern context. The interior, which was not completed until 1960s, provides a truly unique decorative ensemble of wood and marble.

Mosaics from Italy and stained glass from France constitute the major artistic components of the monument. 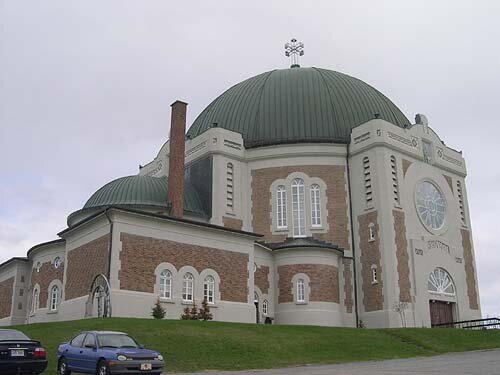 In terms of regional history, the construction of the building is a testament to the optimism and determination that motivated the local population at that time, for it was completed in 16 months in a region newly opened for settlement and in a village with only ten years of existence behind it.

The Amos cathedral has been classified as a historic monument by the Quebec government.