Guido Nincheri, a famous Italo - Quebecer created an impressive fresco at La Madonna Della Difesa church. There are hundreds of ecclesiastical and political figures there.

The mural commemorates the Lateran Treaty of 1929, when the modern State of Vatican was created. Nincheri himself supports Pope Pius XI. Nincheri’s son is dressed as an altar boy. The fresco traces the history of the church from Adam and Eve through the patriarchs and into the 20th century.

A Canadian senator in the cap and gown of the University of Ottawa is present. To the right of the fresco we can see the most famous subject – Mussolini on horseback.

We must not forget than until Mussolini invades Ethiopia, he was an internationally acclaimed statesman. 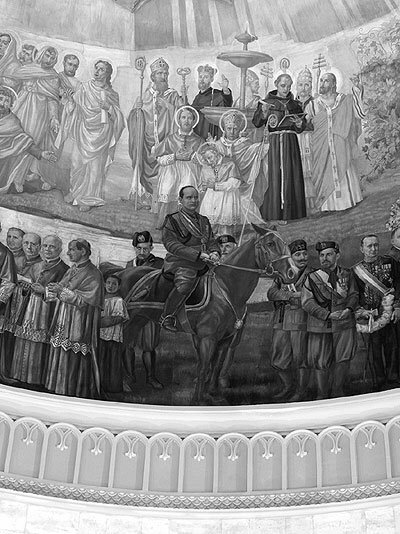 During the World War II, the mural was covered up. Guido Nincheri was branded as fascist and left Montreal for Rhode Island’ US. He returned after the war and painted several other ecclesiastical works.