In 1910, a second Italian parish was created in Montreal (the first one was Notre-Dame-de-Mont-Carmel parish). The church was originally built the same year.

Since many of the new Italian residents came from Campobasso, they called the new church, established at the corner of Dante and Henri Julien, La Madonna Della Difesa Church – Our Lady of Protection. In 1918, building of a new church began. Much of the funding came directly from the Italian community.

Even those who had only a few dollars to give, have their names engraved in marble, inside the entrance. The style of La Madonna Della Difesa is Roman and is typical of Italian church architecture.

The architect and designer was Guido Nincheri, a native of Florence, who, because he was not then a Canadian citizen, submitted his plans through a local architect, Roch Montbriand. 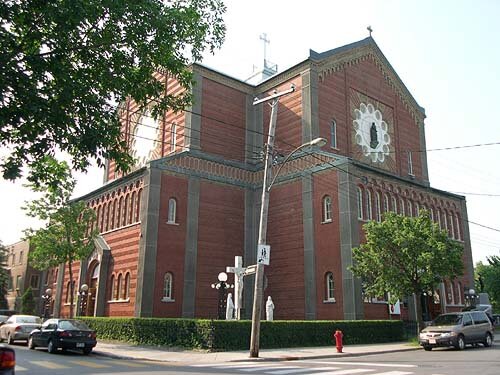 A giant fresco was painted in the church by Nincheri. The artist painted murals in many Quebec churches, but he is best known for this impressive fresco presenting ecclesiastical and political figures, Benito Mussolini among them.

The church’s magnificent white Carrara marble altar and railing were installed in 1950. In 1984, a statue of a soldier was placed outside the church to commemorate Italian soldier.

The inscription reads: Omaggio ai caduti dei tutte le guerre (Honour to soldiers of all wars). Dante Street was named for Italy’s 14th century poet Dante Alighieri, in 1920. A bust of the poet is in Dante Park west of the church.