Located 87 miles (140 km) east of Québec City, on Highway 132 and on the shores of the St. Lawrence River, St. Denis-de-la-Bouteillerie parish was established in 1831. The first church, built in 1850, was damaged by fire in 1886. The church was immediately rebuilt on the same site and inaugurated in 1887.

The interior of the St. Denis Church is in the Gothic style and its chancel has remained untouched even after Vatican II. This church can accommodate 600 seated parishioners in the nave and in the rear gallery.

In September 1939, at the request of Rev. Georges Gervais, Casavant handed through Mr. Chapais, a project for a new organ of this church. The instrument was installed in mid-December 1940. Instead of locating the organ in the rear gallery as it was usual, it was decided not to remove pews and to install the pipework 12 feet high on a main windchest; this location will permit an even better sound distribution throughout the church. The instrument was twice restored since the 1970's: a complete overhaul was executed in 1973 by Orgues Providence, and Ateliers Guilbault, Bellavance, Carignan restored the 4 reeds stops in 2004. 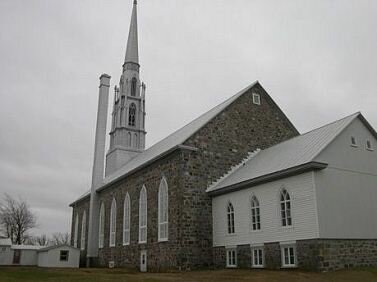