Church of St.Andrew and St.Paul

Church of St.Andrew and St.Paul

Church of St.Andrew and St.Paul

The congregation of The Church of St. Andrew and St. Paul is an intercultural Christian family in the city of Montreal.

Presbyterians, like all Christians, are part of the body of Christ and as such are members of the ecumenical community that accepts Jesus Christ as Lord and Saviour. Within this broader community the congregation has traditions, doctrines, beliefs and teachings unique to the Presbyterian Church in Canada and to the Reformed Tradition of which it is part.

Teaching elders are Ministers of the congregation, and ruling elders share with them the work of pastoral care, oversight and leadership. Together, they form a Kirk Session that directs affairs in each local church.

The Church of St. Andrew and St. Paul is located at 3415 Redpath Street on the corner of Sherbrooke Street West in downtown Montreal. It was built in 1932 according to the plans of the architect Harold Lea Fetherstonhaugh in a Gothic Revival style. The length of the building is of 67 meters et its height is of 41 metres.

The church is in close proximity to the Montreal Museum of Fine Arts, the Concordia University Sir George Williams Campus and the Guy-Concordia Metro station.

In 1809, The first St. Andrew's Church was built on Saint Peter Street in Old Montreal. The new Saint Andrew's Church building was built in 1851 on Beaver Hall Hill, at the corner of De la Gauchetière Street. The church was inspired by the plans for the Salisbury Cathedral, and was known as the Scottish Cathedral, but it burned to the ground in 1869 and was rebuilt on the same location.

In 1875, St. Andrew's remained out of the merger that joined Canadian Presbyterians; instead, remaining with the Church of Scotland until their merger with St. Paul's Church in 1918. In 1927, the former church was demolished to make place for the head office of Bell Canada on Beaver Hall Hill.

The present building was and opened in 1932. The idea to build this church came about in 1918 following the merger of two separate Presbyterian congregations formed in the 19th century.

The materials used in construction were steel and reinforced concrete, although the interior is made entirely of stone. Built in the style of a cathedral, the interior of the church has three aisles. A large stained glass window overlooks the main communion table. There are also two windows made by William Morris who was associated with the English Arts and Crafts Movement.

The wrought iron screen located in one of the chapels won an award for the architect, Fetherstonhaugh.

The church's organ was built in 1932 by Casavant Frères, and is the largest in Montreal with 7000 organ pipes.

Address of the Church of St. Andrew and St. Paul: 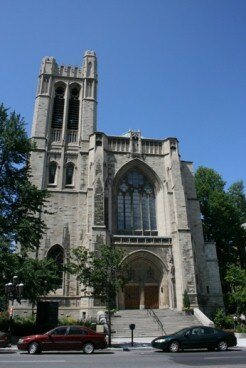 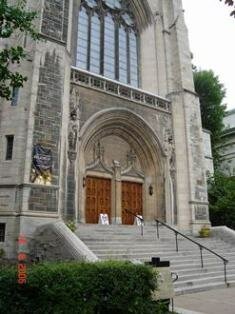 Portal of the church. Photo : © ProvinceQuebec 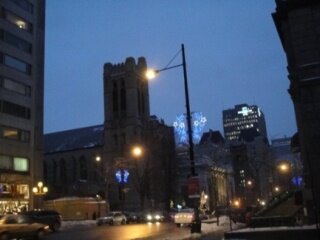 The church in the night. Photo : © ProvinceQuebec