The St. George Antiochian Orthodox Church was built by the plans of the architect Raoul Gariepy and the contractor and artist Emmanuel Briffa. A symbol of historic and enduring cultural traditions, this church was built in 1939-1940 to serve Canada's oldest and largest Syro-Lebanese Orthodox community. The building's design is a combination of eastern and western influences, visible in its domed architecture and in the decorative program of the interior, including murals and icons by Emmanuel Briffa.

Home to many organizations involved in humanitarian activities, the church is at the heart of its community and represents an integral part of the fabric of Canadian life.

Located in the Villeray neighbourhood of Montreal, the church is a handsome brick building designed in a predominantly Byzantine style. Capped with a pediment and flanked by twin three-storey bell towers, the façade is distinguished by a grouping of three round-arch windows above an arched entranceway. The interior is a marriage of Byzantine and western influences, in its broadly arched central nave, decorated with a splendid program of murals and stained glass windows.

St. George Antiochian Orthodox Church was designated a national historic site of Canada in 1999. Key elements contributing to the heritage value of this site include: the location in the Villeray neighbourhood of Montreal; the church’s  synthesis of Byzantine and Romanesque Revival styles, as shown in the symmetrical façade, central dome, paired towers with cupolas, round-headed windows, gable roof, and contrasting surfacing materials; the church’s close relationship with its accompanying parish house; the setback from the street, approached by a grand staircase; the design of the church interior, reflecting the Orthodox Antiochian liturgy; the iconographic program of the surface decorations, notably the mural paintings and stained glass.

When the first wave of Syro-Arab immigration began in Québec in the 1890s, the newcomers established an organization that would maintain a sense of community and assist new immigrants in establishing themselves. To that end, a “Syrian Benevolent Society” was founded by Rt. Rev. Raphael Hawaweeny in 1896. 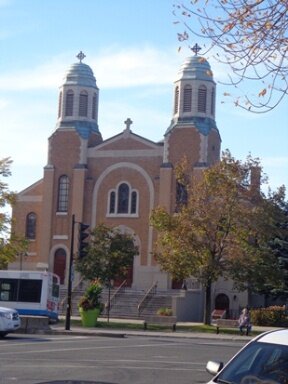 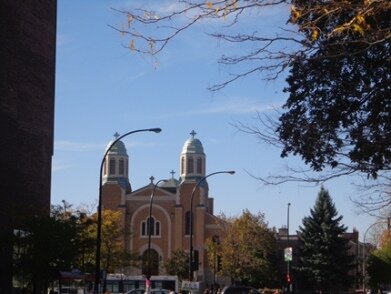