The Holy Sacrament Shrine, located in Montreal, is the first adoration shrine built in North America. It is entrusted to the Fathers of the Most Holy Sacrament who came to Montreal in 1890.

The beautiful chapel, listed as a heritage site since 1979, was built between 1892 and 1894 upon plans drawn by architects Resther and Son. The interior of the chapel is remarkable, and it reminds us of the first Roman churches mainly of St. Sabine on Aventin in Rome.

Its elements integrated in the decoration of the chapel are related to the sacrament of the Eucharist. The three-nave rectangular church of the Shrine is an interesting piece of architecture as much as by its volume as by quality of its wood-sculpted and painted decor. The church is 43 metres long and wide by 14 m high. 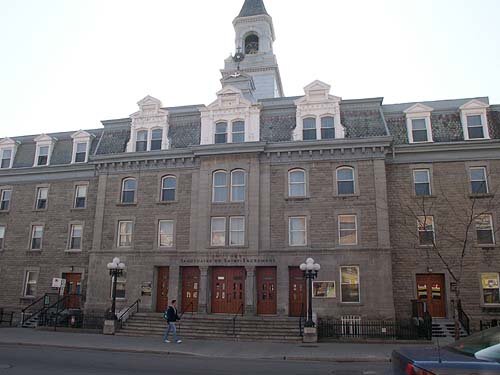 The uppermost gallery has delicate arcades. The lower gallery is hung to wood-painted pillars topped by Corinthian columns decorated with a unique corona of acanthus.

The main altar, located at the far end of the apse, dates back to 1915 The interior decoration of the main nave is the work of Georges Delfosse, and eight stained-glass windows were produced by Henri Perdriau and M. Beaulieu. Besides, sixteen medallions, depicting saints venerated by the Most Holy Sacrament Congregation, adorn the ceilings of both lateral naves and first gallery. They were executed by Narcisse Poirier in 1937.

The church is embedded into a monumental building following the addition of two wings and a façade. In 1926, due to the increase of population in the area, the shrine became a parish church dedicated to Our Lady of Most Holy Sacrament. In 1998, the church was returned to its original vocation following a reorganization of parishes in the area.

In 1894, Casavant Frères built the organ for the church. In 1915, the Fathers of St. Sacrement, owners of the shrine, made enlarge the instrument to better fill the large nave. Unfortunately, on February 12, 1982, the church was the victim of a criminal fire. The building was restored to original the next year. In the fall of 2004, the church was handed over to the Monastic Fraternities of Jerusalem.

Address of the Holy Sacrament Shrine: