This church is located in La Petite-Bourgogne district of Montreal.

The St. Cunegonde parish of Montreal in this district was established in 1875.

A first chapel, installed in a former Protestant temple of Windstaley Hall was blessed by Bishop Edouard-Charles Fabre, of Montreal. Later, a church, in the Jesuit style was built to serve the parishioners, but it was destroyed by fire in 1904.

In 1906, thus, architect Joseph-Omer Marchand is commissioned to prepare the plans for a new church of St. Cunegonde. The embossed stone church, topped by two identical spires, looks impressive. Its façade has a monumental portal framing the main entry and a large rose window located right above it. With its distinctive style and its mansard roof has very high vault (98 feet or 29.9 meters) has no pillars and its nave is lighted by a series of windows that are three-story high.

The neo-baroque interior is inspired by the Fine Arts School of Paris. It is decorated by paintings and frescos. The pulpit and the baptismal fonts were sculpted by Elzear Soucy. The St. Cunegonde church incorporates one of the most beautiful paintings of the Apotheosis of St. Cunegonde, made by Georges Delfosse. It is a large backed painting, i.e. painting pasted up directly on masonry.

The painting covers the vault of almost the entire church. Vaults are completely decorated with backed paintings that are inserted into plaster decorations. The five bell carillon was blessed in 1907. The building was restored in 1984 under the supervision of architect Claude Beaulieu. 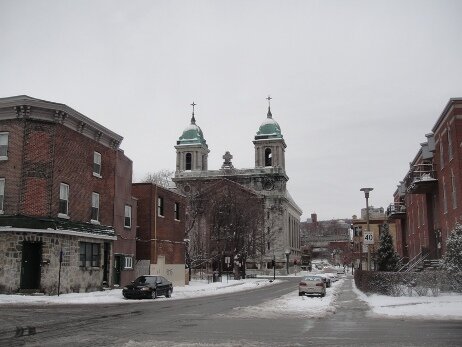