Chalmers-Wesley United Church originated with the Reformed (Protestant) Сhurch members who came to Quebec as soldiers with the British Army in 1759.

The first religious services for these soldiers were provided by military chaplains and lay preachers, who used the Jesuit Barracks as a place of worship (the former Jesuits’ College, located where Quebec City Hall is today). Both Chalmers Free Presbyterian Church and the Quebec Methodist (Wesleyan) Church experienced steady growth in the second half of the 19th century.

Congregationalist, Methodist and Presbyterian churches throughout the country merged in 1925 to form The United Church of Canada.

The church, built in 1853, was designed by the architect John Wells. The building is a fine example of Neo-Gothic architecture. Its soaring steeple is the tallest within the walls of historic Old Quebec City reaching 164 feet above the sidewalk at its peak. 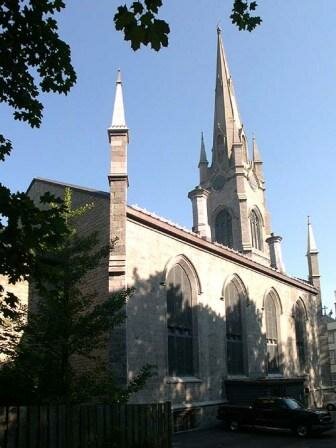 The richness of its woodwork and burgundy carpeting give the church its warm atmosphere. The sloping floor and comfortable curved pews facing the organ console are unique in Quebec City.

All but one of the eight stained-glass windows were designed by Wallace J. Fischer. They were built at the Bernard Leonard workshop in Old Quebec.