This church is the primate church of Canada and seat of the Roman Catholic Archdiocese of Quebec, the oldest see in the New World north of Mexico. It is the parish church of the oldest parish in North America, and the first church in North America to be elevated to the rank of minor basilica by Pope Pius IX in 1874.

The Notre-Dame Cathedral is part of the UNESCO World Heritage of Historic District of Old Québec and it has long and close associations with the history of New France and Canada.

Built in 1647, the Cathedral has twice been destroyed by fire throughout the centuries.

Indeed, during the siege of Quebec by the British in 1759, the church was destroyed by bombing for the first time and it was rebuilt Jean Baillairgé his son François during 1786 - 1822.

In 1843, François’ son, Thomas, suggested a reconstruction of the façade to resemble the church of Sainte-Geneviève in Paris, resulting in the finest Neo-classic façade in Québec.

In that occasion the cathedral was richly decorated with impressive works of art: baldaquin, canopy, bishop’s throne dais, stained glass windows, paintings, and chancel lamp (a gift of Louis XIV).

In 1922 the church was again gutted by fire, only to be restored once again.

Four governors of New France and the bishops of Quebec are buried in the crypt, including François de Laval, Canada’s first bishop.

Notre-Dame Roman Catholic Cathedral was designated a national historic site of Canada in 1989. 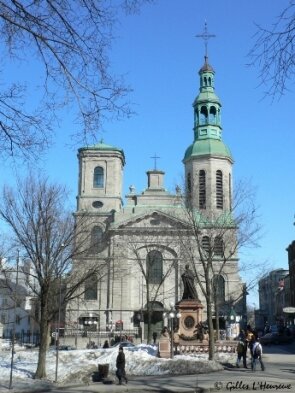