The church of St. Mary

The church of Saint Nom de Marie (Saint Name of Mary) due to a turn in the street of Sainte-Marie City seems to be located in the middle of the main street. It is visible from one end of the city to the other.

This feature is due to the fact that the actual church, larger than the previous, was built over the previous one. The Bishop of Québec, Pierre-Flavien Turgeon, did not succeed in convincing the dead parish priest's house caretaker to turn over the adjacent land she inherited from him, thus the new and much bigger church had to be built on the old place. Architect Charles Baillargé was commissioned to prepare the plans of this church of neo Gothic style that was built between 1856 and 1859. The St. Mary Church is 73 feet (22.3 metres) wide by 180 feet (54.9 metres) long.

The bell tower, which rises 225 feet (68.6m) from ground, was burnt down in 1918. It was rebuilt according to the plans drawn by Georges-Émile Tanguay. Furniture was also designed by Charles Baillargé and built by François-Xavier Berlinguet. The famous sculptor Louis Jobin participated in the building of the three altars because. The vault of the church is characterized for its pointed arches that give an effect of height.

The interior is enhanced by a beautiful painted decor, carried out at the end of the 1880's and beginning of the 1890. Two paintings can be seen there, one depicting Christ's Baptism and the other, the Immaculate Conception. The neo-Gothic pulpit was also designed by Charles Baillargé. The Way of the Cross, oil on canvas, was painted by Joseph Dynes in 1874. 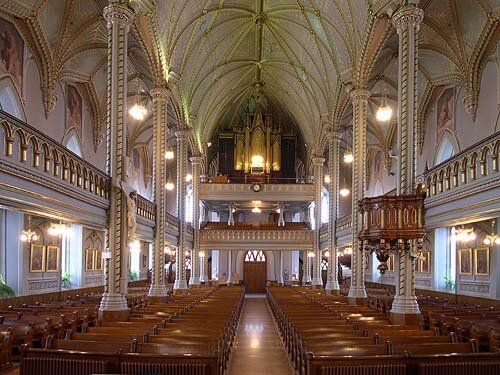 As for the organ, it is 3-manual 29-stop Casavant. The neo-Gothic organ case goes very well with the decor of the church. Its façade pipes are made of wood.

In June, the Organ Festival of St Marie de Beauce takes place in the church. The event offers a series of organ recitals given on Sunday afternoons. Coordinates of the St. Mary Church of Beauce : 60, rue Notre-Dame, Sainte-Marie G6E 3X5 Phone: 418 387-3233