Once upon a time, Gaspésie was inhabited by the Micmacs, one of Algonquin nations, known as well as Maritime Indians who had been settled here for about 3 thousand years. Well, they may have witnessed the Vikings…

The Etchemins and the Montagnais summered on the Gaspé’s north shore, and the Kwedechs, a Iroquoian nation visited the peninsula to hunt and fish. These peoples used the sea and the fish-rich rivers as their primary source of food. During the winter, the autochthons would have to make their way inland to hunt caribou and other big game whose habitat were local forests.

In 1534, the French navigator Jacques Cartier, sailed into a bay of Gaspesie and baptised it the Chaleur Bay – Warm Bay, as he landed here in the extreme heat of the July. On July 24, 1534, Cartier erected a cross on a shore bearing the French royal coat of arms. Thus this symbolic act marked the beginning of the French colonisation of the territory. However, the settlement did not begin at once even when sailors from protestant La Rochelle, Basque country, and French provinces Normandy and Brittany started to fish the Gaspésie cod banks.

At the same time on, trade with the native nations started. It involved the sale of furs to the French. Throughout the years, a series of new arrivals follows. First, the French settle here and the first European inhabitants become known as the Acadians (actually, the Acadie is a vast land known today as New Scotia and a part of New-Brunswick, but a part of the Gaspesie region was inhabited by them as well).

The French noblemen Nicolas Denys, Pierre Denys and Denis Riverin were granted the first territories in Gaspesie (seigneuries) and the permanent fishing and trading posts were set up at Perce and Mont-Louis. However, the development of the French fishery in the Gaspesie region was a failure, since English raids against the French possession were constantly increasing and the British sent regularly marauding vessels from their New England colonies to attack the French posts here.

Well, let’s admit that the French government didn’t pay enough attention to these territories. Twice, in 1628 and in1689, the British destroyed completely the small French villages here. Toward the end of the New France, the Gaspesie was inhabited only by a few hundred people.

In 1758, during the Seven Years’ War, the British captured Louisbourg and raided Gaspesie from there. Since 1763, Gaspesie was officially declared part of the British Empire as part of the Province of Quebec. However, the Gaspe remained isolated and travellers coming here had to make their way through the back-country using canoe routes and portage trails. After the war, many British Loyalists from the US come here and Gaspesie becomes their new homeland after the 13 American colonies become independent. Around 1850, the Gaspesie region counts a population of less than 20,000. This population was mostly located along Chaleur Bay. About half of inhabitants were English-speaking.

Gradually, many other ethnic groups came here throughout the centuries, and by welcoming all these people, a wonderful mix of cultures, traditions, different accents and even colourful culinary delights was created. In the 19th century, the first roads were built here in order to protect Gaspesie against eventual American invasion. Later, a railroad was built from the coast to Chaleur Bay by way of the Matapédia Valley.

Thus it was possible to travel by train all the way to Gaspe. Nevertheless, the road, encircling the entire peninsula, connecting Ste-Anne-des-Monts and Gaspe and opening the Gaspesie region to traffic was finally completed in the 1920th. Since the moment, some timber companies build sawmills at the river mouths.

The most famous are the Price Company (later, Abitibi-Price). Most of the wood however was processed in sawmills in New Brunswick or even in the United States. Since the mid-1900s, the Gaspesie decides to develop tourism. Indeed, the tourist activities play a great role in the life of the Gaspésie today.

A “trip around the Gaspe” is a popular destination for Quebecers, Canadians, Americans and Europeans who have discovered the charm and beauty of the Gaspesie landscape. 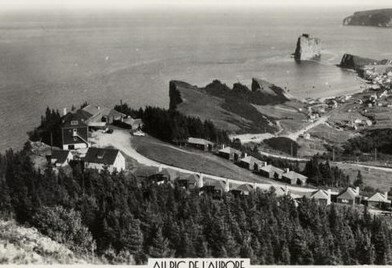 To find out more about Gaspesie: