Percé Rock (or Rocher Percé – pierced rock in French) is an island pierced by a natural arch, located just offshore of the Gaspésie, in the Gulf of St. Lawrence, off Percé Bay.

The rock appears from a distance like a ship under sail. It is one of the world's largest natural arches located in water and is considered a geologically and historically rich natural icon of Quebec. The Percé Rock a major attraction in the Gaspesie region.

It was named Percé by Samuel de Champlain in 1607, in reference to the holes he had seen in the massive block of limestone.

The rock gray, blue or violet, according to the moods of the sea, is linked in legend to a young man of a French family, named Chevalier Raymond de Nerac, is that after his engagement to a lovely girl named Blanche de Beaumont, as an officer of the French army he was posted to a regiment in New France. He was thus separated from his betrothed under expressed sentiments of loving each other for ever. The young man suffered pangs of separation as he traveled in Quebec. He was posted to the Fortress of St Louis and all his thoughts were of his betrothed. His fiancée also could not stand the separation and she decided to travel to Quebec with her uncle, to get married to her beloved. Unfortunately, as they approached Newfoundland they engaged in fierce battle with a Spanish pirate ship.

The French crew were all killed by the pirates and their ship was gutted. However, the girl in question who was hiding in the ship in one of the cabins was dragged out and brought before the pirate captain. As soon as he saw the beautiful girl, he fell in love with her and proposed marriage. The girl, nonplussed, agreed, although her intentions were otherwise. At the time of marriage celebrations with the pirate she suddenly jumped out into the deep sea and drowned.

This created chaos on the deck of the pirate ship and the ship was covered with thick fog making sailing difficult, and any rescue operations difficult. The following morning, as the ship was anchored, the crew were facing a huge mass of rock, the Percé Rock, which appeared to be floating near the shore. The Spanish pirates were frightened by the massive rock which appeared in a "veiled appearance in which they thought they recognized Blanche de Beaumont". They saw the girl raise her hand in "malediction". When they tried to turn the ship to avoid it hitting the rock, the apparition disappeared and the ship crashed.

Next day morning people who watched from the shores saw a rock had emerged in the place of the ship, off the Cape Rosier. The rock appeared like a "large vessel under sail". The local fishermen still say that the gentle spirit of the Blanche De Beaumont haunts the great Perce Rock, two hundred years after the girl drowned there. After this incident, the young man also died out of shock.

Percé Rock is part of the range of cliffs, bays and hills on the SW side of Mal Bay, which are formed of reddish-gold limestone and shale. It is linked to mainland (at Rue du Mont Joli) by a sandbar at low tide. The Bay of Perce is situated between this rock and the High Head. There is a reef to the SW of Percé Rock, about 0.5 miles away from the shore. The town of Percé is located on the shores of the bay. Its main industry is fishing. Percé reef is about 0.5 miles from the centre of the town where small vessels can be moored. Midway across the rock is a shoal that stretches over a length of 0.25 miles. 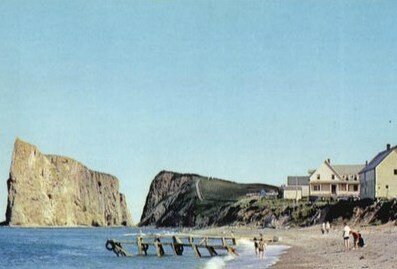 View of the Perce Rock from the north beach.Postcart of the 1960ies 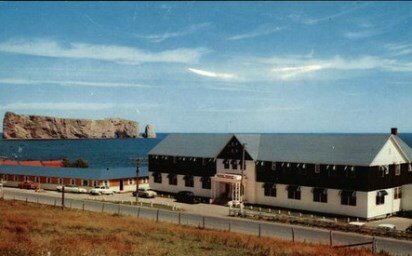 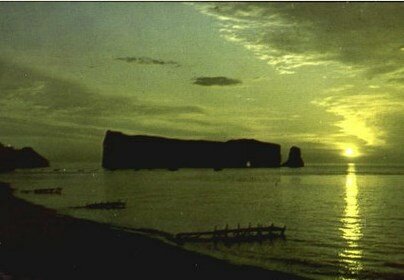 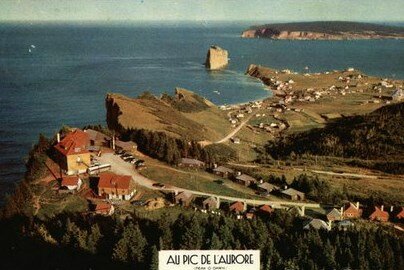 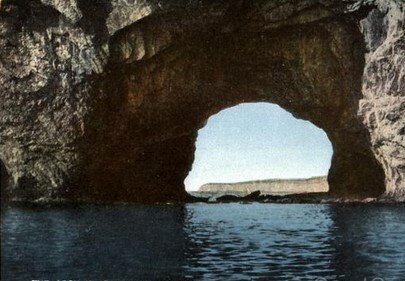 The arch in Percé Rock, postcard of Novelty Mfq Co 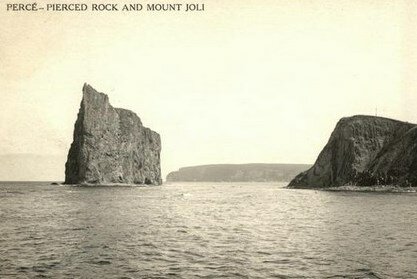 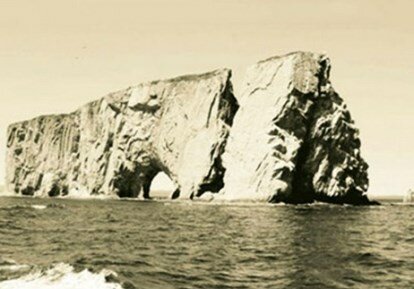 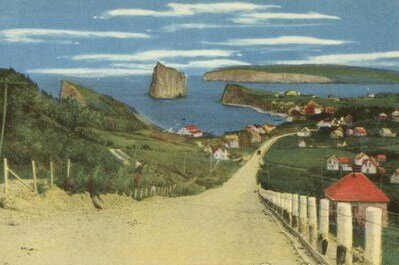 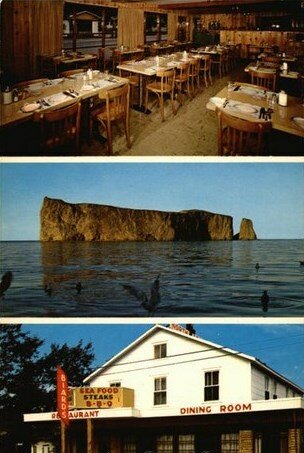 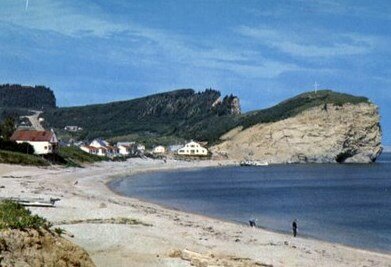 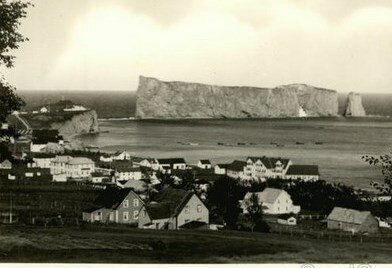 View from S.W.Hillside on the Perce Rock. An old postcard 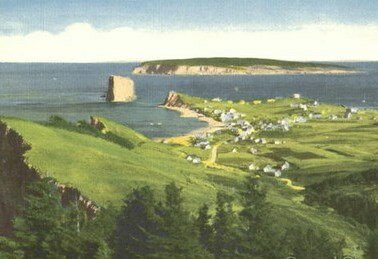 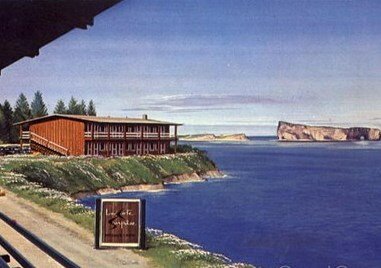 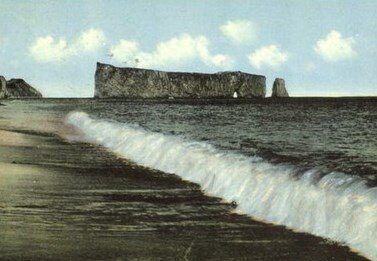 A wave at Perce, an old postcard 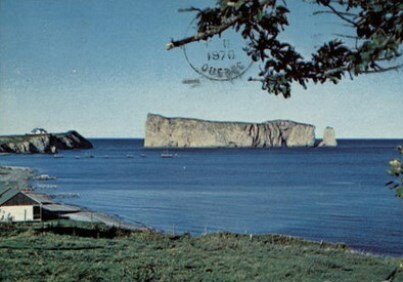 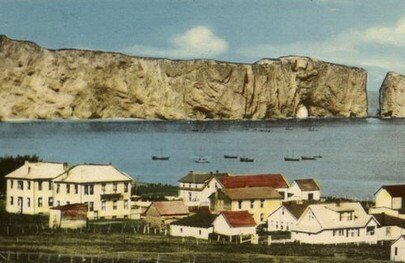