St-Michel Cathedral of Sherbrooke, the seat of the Archidiocese of Sherbrooke, was built on the heights of the St-Michel cliff just a couple of steps away from the downtown. Perched on an acropolis, the massive fortress-like cathedral overlooks Sherbrooke and its surroundings.

The cathedral reveals the evolutional spirit of its main architect, Louis-Napoleon Audet. The first church at the site of the present cathedral, dedicated to St. Columban, was built in 1826. In 1854, the construction of a new church, dedicated to St. Michel, started.

Costing of $5,200 at the time, the new 41 by 15-meter church became the basilica-cathedral in 1874. Resembling the Cathedral Our-Lady-of-Paris, it, however, remained unfinished, for lack of financing: two small towers had to be built. Pope Pius IX created the Diocese of Sherbrooke in 1874 and Bishop Antoine Racine chose St. Michael as his cathedral.

Construction of a new cathedral began in 1956. To build exterior walls, materials from neighboring regions were used: granite from St. Sebastien, bricks from East-Angus and Richmond, and terra cotta from Terra Cotta Co., Montreal. While the old cathedral faced south, the new chancel faces east. Oval windows give the building a medieval look. The new cathedral was completed in 1957. It received the papal honor of Minor Basilica two years afterwards. The cathedral has 105 stained glass windows: 34 large, 11 medium, and 60 small, created between 1959 and 1965 by the famous glassmaker Raphael Laudeur, from Paris, upon drawings by Brother Gerard Brassard.

A large main altar is installed right in the center of the chancel. The polished granite table, from Chicoutimi, is 12 feet long and 8 feet wide. It is supported by eight onyx pillars from Morocco and two green marble columns from St. Barthelemy. Bishop Georges Cabana consecrated the cathedral in June 1959. 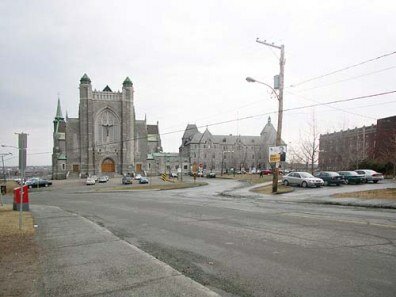