Heidi Klum is the woman who graced the most expensive brassiere in the world, the precious stones’ encrusted Victoria Secret’s marvel (the brand’s diamond undergarments are estimated to range from 2 million American dollars for a brassiere to 30 million USD for a bikini). Although the province of Quebec currently lacks a Victoria Secret (women’s lingerie and accessories) store, the American company may have plans of expansion for the future.

With hazel eyes, blond hair and almost 5’10’’ of legs, Heidi has captured the fantasies of many people. Throughout her modeling career, the former Victoria Secret’s Angel (that is what the company’s models are called) has graced covers of most renown magazines: Elle, Vogue, Sports Illustrated Swimsuit Issue and Marie Claire. She was discovered at age 18 when she won a modeling contest where she outshined 25000 other young ladies and secured a contract with Metropolitan Models New York.

As for her love life, she is married to soul and soft rock British musician Seal. They have three biological children. Heidi also has a daughter from a previous relationship, who has been officially adopted by her husband in 2009. Having her first child in 2004 apparently got her in hot water, since according to her modeling contract at the time she was prohibited to alter her image in any way, and staring a family was considered as disrespecting that arrangement.

Aside from being a talented model and actress, she is perhaps most famous today for her involvement with the successful television venue Project Runway, a reality show about fashion designers competing with each other. Heidi was the host, the judge and the executive producer. She subsequently was nominated for an Emmy Award for each of the first four seasons.

In 2010, Heidi was spotted several times without make-up, once when she was shopping for designer watches as a Christmas gift for her family and on the occasions that she worked undercover as a waitress at a pizza parlor for the show I Get That A Lot, a television special that depicts celebrities assuming regular working class jobs. 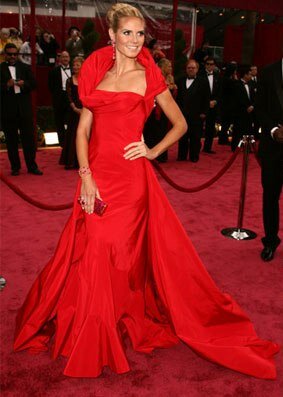