The I-Phone 3G (in 2010, the new generations 4G and the anticipated 5G, captured the spotlight) was a tremendous success in all of Canada, not only in Quebec. In 2005, the first Apple store in Canada opened in Yorkdale, Toronto.

Several years later, the first Apple store in Quebec was opened in Carrefour Laval, a big shopping mall in Laval, a municipality that used to be part of greater Montreal. In 2008, an Apple retailer opened its doors in the city of Montreal on St-Catherine Street.

The store is impressive, contains two floors and pretty much all the I-Gadgets and Macintosh computers one can dream of. A brief walk through any high-density Montreal area will have onlookers convinced that the city has adopted Apple technology; the number of users of such devices is astonishing.

The corporation’s sales have soared in the last decade. The I-Pod, I-Phone and MacBook Pro and other laptops have exceeded buyers’ expectations. For instance, the MacBook Air is most likely the thinnest, lightest laptop in the world, not to mention as stylish as possible. However, nothing in this world seems to be perfect, so there appear to be some problems with this particular model’s hinges. Naturally, if the lid is pushed back too far they snap, but one is guessing that perhaps they snap without outside help as well.

Unfortunately, the hinges cannot be replaced separately, only with the whole top, which is pricy, unless one takes an extensive warranty, in which case, as in some other exceptional cases, the repairs are covered. Macs have many advantages, but a potential drawback is that some programs and games, such as SimCity, with the .exe extension cannot be run. Never mind!

The Boot Camp built-in in Macs can save the day, partitioning the disk in PC and Mac spaces. According to testimonies, both the partitioning and reverse processes are fairly easy.

Genius Bar is the name given to the repair and consulting department of all Apple shops, appointments can be made online, by phone or in person. Macintosh prides itself in being as fair as possible in their policies. If they recognize that the merchandise was defective by their own fault, they will remedy the problem at no additional charge even if the warranty is expired. Of course, cases vary, so this is for exceptions. Montreal Apple store is not only futuristically pretty in appearance, but also very friendly.

On the 2010 Boxing Day (December 26), there were as many as four Apple salespeople greeting customers once inside the store. 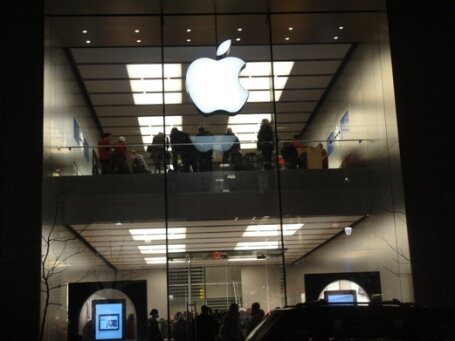