In the Middle Ages, the fatter a woman was, the more beautiful she was considered. Indeed, beauty is in the eye of the beholder, and beauty standards evolve and change with communities. Furthermore, today, different societies attribute different traits to diverse beauty elements. In most modern societies, the thin female body is idealized and the emaciated waif image is promoted by the media to a significant degree. Some academics believe that such idealization and subsequent internalization of the thin ideal, leads many girls and women to suffer from eating disorders, discussed later in the present short essay.

Diets are dissimilar and vary not only in terms of their efficiency, but also in terms of their health benefits. For example, crash diets are rumoured to be inefficient and to cause health problems. Therefore, crash dieting is not only detrimental to your health, but may not make you lose weight, especially in the long run. Actually, this is a very important part of diet and exercise impact on weight maintenance, weight control, weight loss and weight gain: the long term. Because many diets may appear to make you slimmer in the short run by making you lose water the body holds naturally, but they remain inefficient in the long haul.

Further, countless studies have been done on how diet and exercise interacts with weight control. For example, motivation to maintain and/or lose weight may be extrinsic or intrinsic, just as is the case with motivation in general. Motivation can be intrinsic or internal, and extrinsic or external. Extrinsic motivation remains tied to external rewards and is generally considered less reliable, since if the rewards disappear, so does the desire to perform the activity. Indeed, researchers have shown that people who were intrinsically motivated to exercise, and who exercised with vigour and repeatedly, kept the weigh off for longer periods after an intervention program was carried out.

Alternatively, eating disorders may be viewed as the unhealthy, abnormal continuum of dieting and exercising. To illustrate, wanting to be fit and enrolling in a weight-lifting program is a healthy endeavour, to be praised in many cases. However, counting calories may become an obsession for some and turn into an anorexic or bulimic nightmare. Anorexia nervosa and bulimia nervosa are some of the most common eating disorders which have to do with excessive preoccupation with weight and body proportions, and also a distorted self-image. Anorexia and bulimia affect mostly women and homosexual men, although extreme bodybuilding has been proposed as the equivalent of the mental illnesses in heterosexual men.

Notwithstanding, anorexia nervosa, bulimia nervosa and binge eating comprise disorders compiled in the DSM-5 (Diagnostic and Statistical Manual – fifth version). Antidepressant medication may at times be prescribed to treat these in conjunction with other therapies. Moderation seems to be one factor distancing disordered eating from healthy attention to one's diet and physical activity, but others claim that it is the point when the mind is no longer in control of the regimens, but the calorie counting and strenuous exercising take over and one loses control. Others, mostly scholars, point to neurochemical imbalances, and other genetic, biological and scientific explanations drawing the line between healthy and unhealthy dieting, and normal and excessive going to the gym. 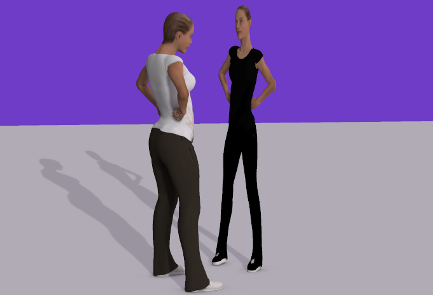