Perception encompasses the sensation, coding and interpretation of external stimuli. Sensation differs from perception in that it is only the physical recording of stimuli, without the interpretation. Interpretation, in this case, does not necessarily mean the conscious making sense of events, but rather how phenomena are physically interpreted by the brain.

At least as traditionally conceived, human beings enjoy five senses: sight, smell, touch, hearing and taste. To illustrate, one may look (pun intended) at the journey from photons to the conscious understanding of this sentence. Vision’s first step is for photoreceptors to capture the light reflected from an object.

There are two types of photoreceptors: rods and cones. Rods greatly outnumber cones, and the former are at the periphery of the retina, whereas the latter are at the center (fovea). Rods are more sensitive and enable seeing in the dark; cones work better in the light, display finer acuity and are the only ones to perceive colors.

Of the three cone types, each length is associated with a different part of the spectrum, measured in nanometers (nm). Short of using technology, it is impossible for the human eye to detect light below 400 nm (ultraviolet) and above 700 nm (infrared). Ultraviolet is exclusively accessible to certain bees, while only some snakes’ visibility continuum encompasses infrared.

The receptors transmit the image recorded along the optic nerve. Transduction (the transformation of the imprint into electrical current) occurs at this stage. The exact place where the optic nerve leaves the retina, the optic disk, contains no receptors, so there is a blind spot in vision, which we are unconscious of because the brain compensates (fills in the logical missing piece based on surroundings). If desired, one can actually notice how a tiny object will disappear if the exact site (outer upper side of the vision field) is located.

The optic nerve leaves the eye laterally, and is cross-connected: the left hemisphere analyses input from the right side, and vice versa. The contralateral relation stands for most of the body, the precise reason why a patient who suffered a stroke to the right hemisphere is unable to move his or her left leg, hand, hear with the left ear, etc.

The Wada intracarotid hemispheric dominance test is pretty amazing. To appreciate this, it may be helpful to first localize speech production and comprehension: usually left hemisphere, Broca’s area and Wernicke’s area, respectively. Through an artery that leads directly to the left hemisphere, sodium amobarbital is injected, so that side of the brain is anesthetized. Subjects almost instantly lose the capacity to lift their right arm, and become mute, for the duration of the barbiturate’s effects. Vision has been extensively studied in the cat, and even more so in the rhesus macaque.

The primate brain being the closest to the human brain makes monkeys excellent subjects for neuroscientific research. Behind the cat’s retina is the tapetum lucidum, that - to make a long story short - functions similar to a mirror reflecting light, this is why Felis catus’ eyes glow in the dark. Smell is somewhat similar in path, only this time the relay stations are olfactory receptors in the nose and the olfactory nerve. Audition’s counterparts are the stereocillia and auditory nerve, while touch gets more complicated: mechanoreceptors, thermoreceptors and several nerves are involved. Finally taste is achieved by chemoreceptors (commonly known in this location as taste buds, topically organized according to flavor) through other cranial nerves, such as the trigeminal and glossopharyngeal. Notwithstanding, smell greatly contributes to taste. 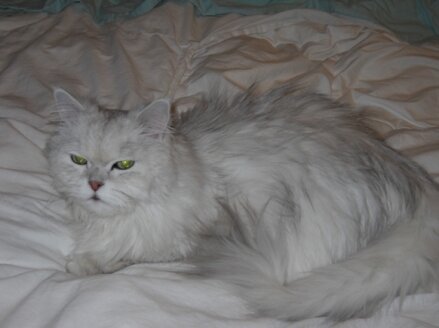