Serotonin (5-hydroxytryptamine) is a neurotransmitter that is primarily involved in mood regulation. The neuromodulator is best known for its involvement in depression, although its malfunction has also been implicated in other psychiatric conditions, such as Generalized Anxiety Disorder, Obsessive-Compulsive Disorder, Attention-Deficit Hyperactivity Disorder, Borderline Personality Disorder, Post-Partum Blues, Autism, eating disorders, panic attacks, phobias and even Schizophrenia (an affliction also involving dopamine overabundance).

Patients with Major Depressive Disorder produce less serotonin as measured by neuroimaging techniques, and this finding is the basis for the common medications used to treat depression, selective serotonin reuptake inhibitors (SSRI). Perhaps the most famous SSRI is fluoxetine, brand name Prozac. The production of serotonin may depend on whether the individual is homozygous (two copies) or heterozygous (one copy) of the 5-HT short allele, homozygotes are more likely to succumb to depression even if under the same stressful circumstances than heterozygotes or those who have not inherited that allele at all (Caspi et al., 2003). Individuals with two copies of the long 5-HT allele are the least prone to developing the illness. Notwithstanding, in their meta-analysis across studies, Risch et al. (2009) found little evidence supporting this result.

According to Nugent et al. (2008), severe tryptophan depletion leads to a relapse of depressive symptoms. Tryptophan is an essential amino acid found in aliments such as pasta and turkey and a precursor to serotonin synthesis. In the experiment, subjects returned to normal as soon as tryptophan was reincorporated into their diet.

In their review of findings, Russo et al. (2009) cite several authors that have attested to serotonin mediating sleep, aggression, anxiety, thermoregulation, satiety and stress, Curiously, neurogenesis also seems to depend on serotonin. The reviewers also explain the brain reaction to low tryptophan blood plasma levels and “speculate about the possible survival value of this mechanism” (259).

Dayan et al. (2008) suggest that serotonin deficiency mitigates impulse control by lowering inhibition, thus making the action with potentially adverse consequences more likely. The authors also discuss serotonergic pathways’ implication in thought processes related to aversive thought processes. Recalling that in encountering a new stimulus, an organism is often faced with an internal aversion versus approach conflict, the decision resting on whether the object in question poses a threat or promises a reward, respectively. 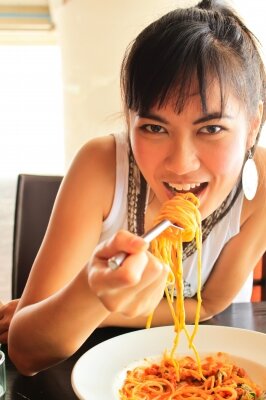 Eating pasta may be the key to happiness, by supplying tryptophan, the precursor to serotonin. Image: nuchylee/FreeDigitalPhotos.net