Stanley Milgram at Yale University conducted experiments on obedience to authority in the 1960s. Subjects were brought into a lab with a one-way mirror; they could see another person on the other side, whom had electronic devices attached to their body (this person was actually a paid actor).

The subject was asked to teach words to the other person, and to (supposedly) give electric shocks of increasing magnitude if the “student” got it wrong. After a while, the “teacher” wanted to stop, but the experimenter insisted that science needed this study of vocabulary acquisition, and urged the participant to continue.

Shockingly, most complied despite screams and the dangerous intensity and amounts of shocks. In an attempt to salvage humanity’s reputation, some critics attributed the results to the Hawthorne effect, which can mean that people behave differently in laboratory situations because they are being watched and because they trust that the experimenters will not let anything truly bad happen. Alas, this is contradicted by Stanford University Philip Zimbardo’s prison experiment, which had to be stopped earlier than planned due to cruelty ensuing from the newly bestowed power on those acting as guards in the simulation.

The conformity experiments carried out by Solomon Asch fail to give much credit to the human race either, at least as far as independent thinking is concerned.

Asch had one participant placed with a group of other apparent subjects (who were all paid confederates), showed two lines of different lengths and asked which one was shorter. Most of the group chose the wrong answer, and although the difference was obvious, in most cases the unwilling lone wolf conformed to the general blatantly wrong opinion. Cognitive dissonance has to do with the fact that humans are uncomfortable when what they say and feel or believe is contradictory. How do they fix it?

According to the 1959 experiment developed by Leon Festinger and James M. Carlsmith, they simply lye to themselves. In that study, a person was asked to perform a very boring task and to subsequently tell other participants that the task was exciting. After informing others, the responders were questioned on how they themselves found the task. 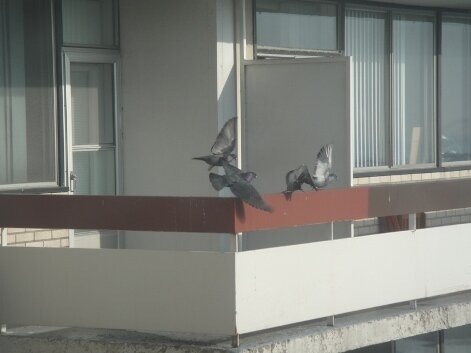 Behaviorism of the pigeons… Photo © ProvinceQuebec.com

Depending on how the persons were compensated for disseminating the unintuitive piece of information, the replies varied. When individuals were paid a large sum in return, they described the task as tedious; when they received minimal remuneration, they said that they actually liked it.

Apparently, the smaller the reward, the greater the need to convince oneself of the deception, through internalization, otherwise the mismatch would cause disagreeable cognitive dissonance. B.F. Skinner is well known for his elucidation of behaviorism (perspective dealing with classical and operant conditioning and external, observable qualities) and creation of what became known as the “Skinner box”. The concept of magical or superstitious thinking was demonstrated by some of his pigeons in the following set-up.

The birds were in a cage that dispensed one grain of corn every 15 minutes. Naturally, this situation is very frustrating to hungry pigeons, who tried to find out what they were doing that was causing the corn distribution.

After a period of time, the birds all exhibited strange behaviors, such as flapping wings ritualistically or dancing around, presumably because they figured that since it was exactly what they happened to be doing when one of the grains came along, by repeating the action they could thusly induce better food rationing.