Neuroscience has many ties to Montreal; many discoveries in the field have been advanced in this flourishing city. Donald Hebb from McGill University, traditionally considered the best university in Canada and consecutively placed in the top 20 of the world, is regarded by many as the founder of neuropsychology.

His work has made possible a better understanding of behavior and its neural correlates. He is famously quoted as saying ‘neurons that fire together, wire together’, which is a nice way of summing up some of his research that made the psychological community understand that when memories are formed, or skills are acquired, there is synaptic reconstruction. Wilder Penfield, after whom a street in downtown Montreal was named, has also made large contributions, and the Montreal Neurological Institute is just plain famous.

But what is a synapse or a neuron? Neurons are cells in the brain that are responsible for pretty much anything that a person does, thinks, and experiences and even for autonomous (involuntary) responses. Neurons fire, they discharge when they are depolarized. As sodium enters the cell, potassium exits aided by membrane permeability. A neuron has an axon, a sort of tail; the neurochemical is transported along the axon from the neuron’s nucleus into the synaptic cleft (the space between neurons). Once in the cleft the neurotransmitter (neurochemical produced by the neuron and responsible for most of what takes place in a mammal’s organism) is broken down, reabsorbed or “communicates” with neighboring neurons. The human brain contains several billions of neurons, for an analogy it is like a galaxy and the neurons are like stars. There actually are neurons that look like stars too (stellate cells).

Three layers of meninges protect the human brain: the dura mater, the arachnoid and the pia mater. In addition, there is the blood brain barrier (BBB), which is a mechanism that protects the brain from transmission of toxic agents that have already entered the body. The BBB is responsible for certain drugs being ineffective due to their inability to cross it. The brain contains two hemispheres, left and right, and four lobes: frontal, temporal, parietal and occipital. Any introductory neuroscience or cognitive science course will cover the fact that despite some specialization, most of the brain is active at any one time, even during REM (rapid eye movement, the deepest kind) sleep. However, one can also say that there exists a large compilation of scientific literature that demonstrates that certain areas are associated with certain events. Thus, if one had to simplify, the parietal lobe is responsible for thinking.

Rumor has it that Albert Einstein had 15% more gray matter in his parietal lobe than the average person. Gray matter is composed of neurons, and white matter of the myelinated nerve endings (myelin - fatty substance, enrobes axons, speeds transmission). Glial cells act as “support staff” to neurons. Further (simplifying) the occipital lobe is for eyesight; the temporal for memory and the frontal lobe is the seat of executive function. 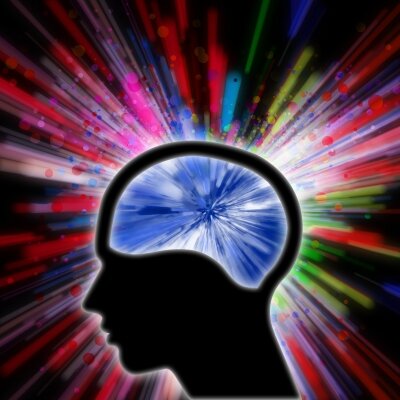