GABA is short for gamma-aminobutyric acid, there are two predominant receptor types for this amino acid neurotransmitter: GABAA and GABAB (Enna & Mohler, 2007). GABA mutations affect reactivity to drugs and behavioral phenotype (the expression of the genotype, in turn the collection of polymorphisms inherited). GABA plays an important role in neural development and functionality of the central nervous system (CNS). The human nervous system is composed of the CNS and the PNS (peripheral nervous system).

The CNS contains the brain, the cerebellum and the spinal cord. The PNS encompasses all connective neural projections (the longest nerve fiber in the human body runs all the way from the spine to the big toe).

As highlighted by Kern & Ziemssen (2007), within the PNS, there is the autonomic or visceral nervous system (ANS), which consists of two parts the sympathetic and parasympathetic, and is primarily responsible for involuntary functions. The parasympathetic nervous system is responsible for unconsciously performed actions such as breathing, thermoregulation, sleep and heart rate. The sympathetic nervous system is activated when the situation calls for a prompt decision, known as the fight-or-flight response, where as the name indicates, the organism must choose whether to confront the situation or escape from danger. Since its inception, the response has been extended to included the “or freeze” option. Neurons are brain cells that transmit information using neurochemicals. The neural body is called the soma, while its “tail” is called an axon; dendrites are cortical projections from the neuron’s cell body.

Myelin is a fatty substance and severe starvation depletes it, resulting in brain damage in extreme cases. Most axons are myelinated, which speeds up transduction of electrical current. In the cerebral cortex of mammals, neurotransmitters can have excitatory or inhibitory effects on neurons close to the synaptic cleft. The synapse if the space between neurons and the cleft is where the neurochemicals are discharged once a depolarized neuron “fires”. Depolarization occurs when sodium enters the cell, while potassium exits, due to membrane permeability, creating an action potential.

A cortical cell no longer polarized is ready to discharge; a refractory period refers to the time lapse during which it is impossible for a brain cell to be stimulated or fire. Thus, there are excitatory postsynaptic potentials (EPSPs) and inhibitory postsynaptic potentials (IPSPs). Neural responses are usually recorded using surface electrodes. GABA is a major inhibitor in the human CNS (McCormick, 1989). GABA antagonists (agents such as picrotoxin, bicuculline and phaclofen that hinder GABA production) lead to convulsions.  As introduced above, the GABAA receptors mediate the early onset IPSP, while the GABAB have to do with its late counterpart. GABA synthesis is dependent on alpha-decarboxylation of glutamate (Martin & Rimvall, 1993), although other GABA precursors have been documented (Yamasaki et al., 1999). 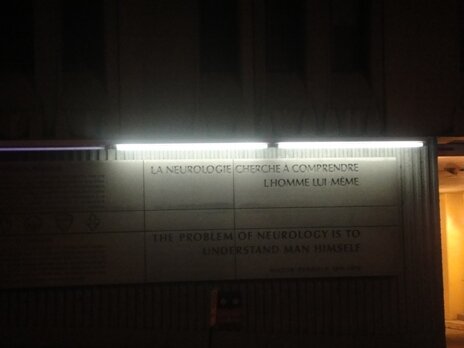 The problem of neurology is to understand man himself (Wilder Penfield). Photo : www.Povincequebec.com