This nice installation represents the city of Repentigny.

The St. Lawrence River, which borders Repentigny, drains a basin populated by seven million people between the eastern tip of Lake Ontario and the city of Quebec. Its water flow at an average rate of 12 600 cubic metre per second, making the second-fastest river in North America behind the mighty Mississippi.

In 2010, in an effort to protect the St. Lawrence River and its ecosystems, a large-scale riverbank rehabilitation project was launched by the Ville de Repentigny, in partnership with the Comité Zones d’Intervention Prioritaire des Seigneuries. The imitative include holding awareness and education activities, planting 1,000 shrubs at the very popular Lebel Island Park and preparing a user guide for shoreline residents.

Here comes the message of Chantal Deschamps, Mayor of Repentigny, explaining the sens of this artwork:

A place to live that is in keeping with our vision for the future. That is the Repentigny of today and tomorrow. A city on a human scale, delighting in its abundant natural heritage and exceptional ecological diversity. The St. Lawrence River and its islands spring to mind, as does the L’Assomption River, but there are the numerous parks and green spaces too. These landscapes shape the identity of our city, give it unity, and play a major role in making Repentigny an ideal place to lay down roots and in which to blossom!

This plant sculpture put the family at the forefront of a green city were water play a central role. The centerpiece of the work is a bridge that serves as a symbolic link between past and present, uniting ideas and generations alike.

Planting trees along the streets and otherwise greening the city to counter heat islands, and safeguarding our shores to preserve biodiversity are measures that meet the needs of current and future generations. 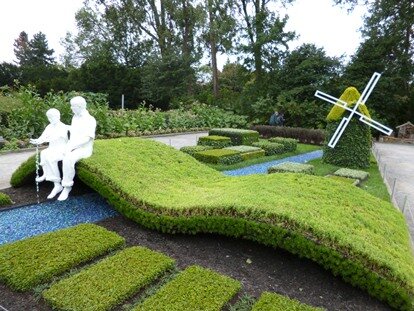 These landscapes shape the identity of Repentigny, give it unity, and play a major role in making the community an ideal place to lay down roots and in which to blossom! Photo by © ProvinceQuebec.com