Lemurs of Madagascar, a species-Rich Island

The lemurs represented at the Mosaiculture International Montreal 2013 are of the ring-tailed species, considered near-threatened by the International Union for Conservation of Nature. The pieces of this creation were among the most difficult to achieve as mosaiculture because of the animals’ small size, and because of the in-motion effect sought.

Madagascar is one of the richest places in fauna on the Earth. Indeed, isolated from the African continent at the end of the Cretaceous era approximately 85 million years ago, at a time when dinosaurs still roamed the planet, this big island is home to species that are unique worldwide.

Lemurs are part of these species that are considered endemic to the island of Madagascar. There are five distinct families in all, divided into 15 genera, then into 103 species and subspecies.

Because of the deforestation being carried out on Madagascar, more than 90% of lemur species are now threatened with extinction, according to the UICN. For 23 among them, the situation is even described as critical.

While lemurs live mainly in trees, the ring-tailed lemur is different, spending most of its time on the ground, sometimes even walking on its two back paws. However, it is still a very skilled climber and can leap from branch to branch even at distances of 15 to 20 feet.

Lemurs are species that are unique worldwide. Photo: © Lucie Dumalo

These lemurs are of the ring-tailed species, considered near-threatened. Photo : © Lucie Dumalo 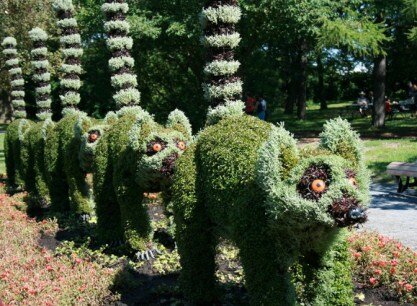 The pieces were among the most difficult to achieve because of the animals’ small size, and because of the in-motion effect sought. Photo : © Lucie Dumalo