Almost family, an artwork presented by the Republic of Guinea

Chimpanzee populations are declining everywhere in Africa. Whereas two million individuals existed at the dawn of the 20th century, today the number is somewhere between 150,000 and 250,000. And the trend gives little cause for optimism: their numbers have fallen by half over the last 20 years alone, resulting in the disappearance of the genus from four African countries A 90% Loss in 20 Years!

The chimpanzee population is still huge, but is considerably smaller than before. Poaching is a problem, as well as deforestation, which breaks up the chimpanzees’ habitat into small islands.

Since the end of the 1960s, many studies have allowed us to become aware of all the intellectual abilities that chimpanzees possess. The female chimp Lana, for example, was the first to learn a symbol-based language invented for primates known as Yerkish.

The chimpanzee and the bonobo are man’s closest cousins in the larger Hominidae family. In fact, man shares 98.7% of his gene pool with each of them! You have to go back six million years, to the end of the Miocene era, to find the common ancestor of these three species.

Thankfully, efforts have been made to reverse this decline. Since 2001, the survival of chimpanzees has been the focus of the great ape protection program called GRASP, established by the United Nations Environment Program. 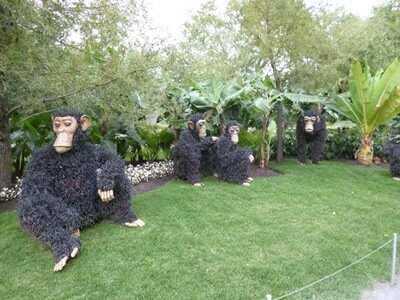 The chimpanzee and the bonobo are man’s closest cousins in the larger Hominidae family. Photo : © ProvinceQuebec.com