One Small Bridge for Mankind, One Giant Step for Biodiversity
Artwork produced by the City of Sherbrooke

Through cohabitation with the natural environment and their actions, humans generate an interrelationship between themselves and the surrounding nature to preserve the vital yet fragile biodiversity of their environment and foster harmony among the various ecosystems. This principle guided the project to build a frog tunnel under highway 220 in Quebec’s Eastern Townships.

This road cuts through the middle of the Brompton Lake swamp and an amphibian migration corridor.

The tunnel lets amphibians cross under the highway safely, to reproduce in the swamp on the other side. The crossing, the first of its kind in Canada, protects the amphibian population and therefore the swamp’s ecosystem, with a rich diversity of reptiles.

While wildlife crossings are fairly new in Quebec, they have been used since the 1960s in France, where they form the core of the “Green and BlueGrid” project that connects various biodiversity loci across the country.

A biologist in the Estrie region initiated the project after noticing that every spring, the roadway became a veritable killing ground for amphibians trying to reach the other side to reproduce. 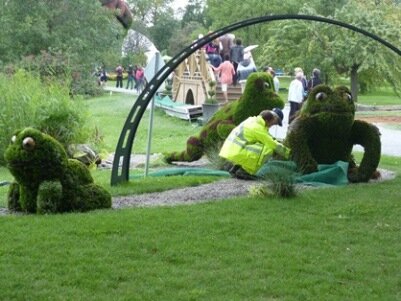 This is the first frog tunnel in Canada. Photo: © ProvinceQuebec.com