The city of Gaziantep, Turkey presented the Gypsy Girl of Zeugma.

The Gypsy Girl is the picture of melancholy. Her hair is parted in the middle and she is wearing a hat. Her forehead is short, her face innocent, and her cheeks are round. Her eyes follow you as you walk around the room.

After learning of the planned location of a new dam on the Euphrates River, a group of archeologists got together in 1995 and carried out an emergency expedition on the site. There they discovered the ruins of Zeugma and removed many works of art, including the Gypsy Girl. Today, the site is located below the reservoir created when the Birecik Dam was built.

At the time the mosaic was discovered, she was dubbed the “Gypsy Girl” because of her short forehead and hat. Some archeologists claim that it’s a depiction of Alexander the Great because of the way the hair is parted, as well as because of the eyes and nose. Others think it’s supposed to represent Gaia, the goddess of the Earth, while still others, pointing to the vines in the background, say that she is a maenad, a worshipper of Dionysus. Whoever she is, her sad countenance has become the symbol of Zeugma. This mosaic was found in the dining room of the House of the Gypsy Girl (Maenad) during excavations undertaken by the Gaziantep Museum in 2000.

Made up of more than 65,000 pieces, this famous mosaic is about 1500 years old. In Turkey, the Gypsy Girl of Zeugma is as famous as the Mona Lisa in Paris. 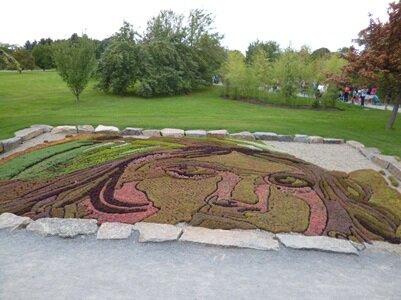 Like the original mosaic, the creation before you is composed of 16,000 plants. Photo: © ProvinceQuebec.com