This apple mosaic was created by the team at the Jardins fruitiers de Laquenexy, located in Moselle, in the eastern part of France, in collaboration with the Montreal Botanical Garden.

It is a reproduction of a piece by Abenaki-Wendat artist Christine Sioui Wawanoloath: Little turtle making the Sun.

The turtle is a powerful symbol in Aboriginal cultures; it is associated with the creation of the world. Some very ancient writings that are considered to be sacred claim that the Great Turtle unites the two Americas.

To make this mosaic, the team handled about 8,000 apples of eight different varieties in order to obtain the desired colour contrasts. The entire piece weighs close to a ton. One week of hard work was needed to achieve this result. At the end of the three weeks it was on display, the apples feed the Botanical Garden’s compost. 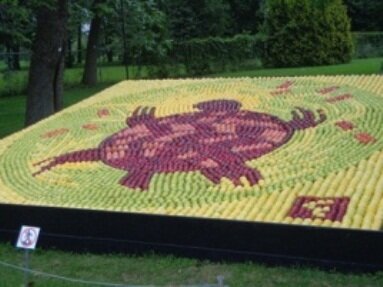 The apples for this artwork have been graciously provided by Courchesne Larose Lteé. Photo: © ProvinceQuebec.com