Little Clownfish and Its Sea Anemone

Clown fish live in a symbiotic relationship with anemones, as each needs the other to survive. The fish’s body excretes a mucus that protects it from the anemone’s fatal venom, and it uses the anemone as a shield. In turn, the anemone relies on the clown fish to defend it against predators.

The island of Okinawa, to the south of Japan, is a subtropical island surrounded by coral reefs. It conceived this artwork. Okinawa is the name of both the large island and the archipelago forming the southern extremity of Japan. Due to their isolation from the continent, these islands are home to species found nowhere else in the world, including two species of birds, the Okinawa woodpecker and the Okinawa rail.

The coexistence of the clown fish and sea anemone visible in the “sea of tropical fish” at Okinawa’s Churaumi Aquarium is the subject of the work presented here. Its authors hope that the incredible seas around Okinawa will continue to be a paradise for fish, and that this work will generate in everyone’s heart a concern for protecting nature.

Finally, it should also be remembered that abundant forests are what contribute to the beauty of the Earth’s oceans. 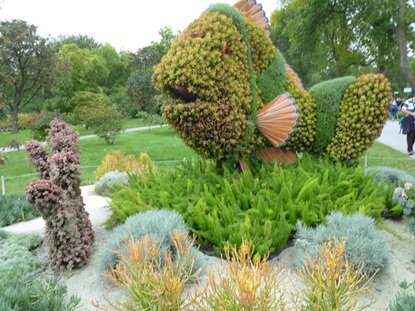 Clown fish live in a symbiotic relationship with anemones, as each needs the other to survive. Photo: © ProvinceQuebec.com