A native of this region of the world, the Veiled Chameleon (Chamaeleo calyptratus), usually of a peaceful disposition, is easily riled if another chameleon blocks its path. If it feels the slightest bit provoked, it alters its behaviour radically, puffing un its body, changing colours, often displaying very bright hues, opening its mouth wide and blowing until one of the two parties, acknowledging its domination by the other, leaves.

The Republic of Yemen lies south of Saudi Arabia. Known for its sweeping arid plains, the country nonetheless boasts a rich diversity of wildlife and vegetation, including some 1,800 indigenous plant species.

As for Yemen’s forests, once lush, only pockets of trees now line the riverbanks. A pioneer of coffee cultivation, Yemen was the only nation to export the commodity until the mid-1700s. Still, Yemenites’s favourite plant remains the qat, a stimulant whose leaves yield a euphoric sensation.

Yemen is home to more than 360 bird species. Its shoreline is teeming with crab, crayfish, shrimps, jellyfish, sea cucumber. Fallen to hunters, wild mammals (the leopard, the antelope, the gazelle) have disappeared, leaving only beasts of burden and house pets: camels, dromadaires, oxen, donkeys, goats, cats and dogs. Among the 40 species of serpents present, 14 are poisonous. Other reptiles, such as monitor lizards and geckos, are much calmer. The chameleon’s eyes are able to pivot almost 180 degrees, independently of one another. When it spots its prey (it feeds on insects), the chameleon trains both eyes on it.

The chameleon ambushes its victim and captures it with its highly agile and sticky tongue. When fully deployed in such a manner, the organ can reach one and a half times the chameleon’s body length. 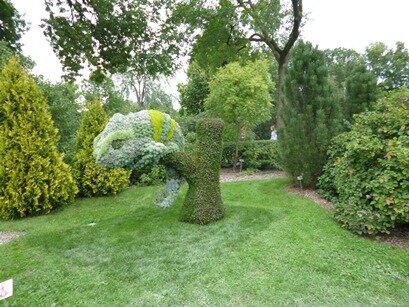 The Veiled Chameleon, usually of a peaceful disposition, is easily riled if another chameleon blocks its path. Photo: © ProvinceQuebec.com