Salamander according to Gaudi

City of Barcelona, capital of Catalonia, Spain, presented at the Mosaicultures Gaudì’s Salamander, an artwork which depicts a salamander, a popular motif in Catalonia.

This particular salamander graces Güell Park in Barcelona, Catalonia’s capital city. The park is the largest heritage landscape work in all of southern Europe and a UNESCO World Heritage Site, as are all the works by famous Catalan architect Antoni Gaudì.

The park Güell was designed and built from 1900 to 1914. It was originally supposed to be a housing development with homes designed by architect Antoni Gaudì. Because it was too avant-garde for the day, the project was abandoned, but the site and its landscaping were bequeathed to the City of Barcelona by the Guëll family.

More than 300 species of salamanders have been identified around the globe. As with other amphibians, populations are declining everywhere on Earth. Changing habitat and the presence of agricultural residues in water are the prime causes. 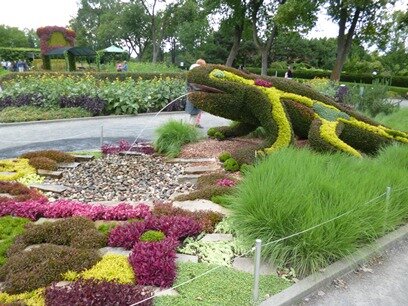 The salamander symbolises the diversity of Catalonia’s culture and the biodiversity of its landscapes. Photo: © ProvinceQuebec.com