This artwork is presented in collaboration with the Mexico Tourism Board, and shows one of the trajineras aboard which tourists may discover Xochimilco’s winding Canals.

Xochimilco is a region often referred to as the Venice of Mexico. It has been a UNESCO World Heritage Site since 1987 because of its cultural significance and its spectacular natural features.

The municipal administration of Mexico City has introduced measures to protect the environment of this natural reserve so visitors can enjoy a guided ecological and cultural tour and may continue to discover and appreciate Xochimilco’s canals by boat. Tourists can visit the nearby ecological park that explains current initiatives for preserving the indigenous flora and fauna of this region, one of the city’s most important wetlands.

The park includes a recreation area as well as a bird of sanctuary that welcomes, among other species, the American White Pelican (Pelecanus erythrorhynchos), who inhabits the region during the harsh Canadian winters.

Visitors can ride on the local trajineras, odd-looking, brightly coloured wooden boats. This mode of navigation used to be the region’s chief means of transportation, particularly for carrying produce and foodstuffs, from the pre-Hispanic period up to the twentieth century.

Xochimilco is composed of a network of canals and artificial islands, floating gardens known as chinampas. They are the vestiges of Lake Texcoco, an enormous lake that covered the entire region long, long ago. In fact, the gardens were created by the ancient peoples a millennium ago to increase agricultural yield. Today, they account for a significant share of the region’s agricultural output.

The work shows one such boat that carries tourists through Xochimilco’s criss-crossing canals.

Located 2,000 metres above sea level, the ancient Lake Texcoco was an endorheic basin, that is to say, it collected water from its tributaries but allowed no outflow to other bodies of water; the lake’s water level could only equilibrate through evaporation.

The lake was drained and eventually dried out, and Mexico City was subsequently built on the lake bed. 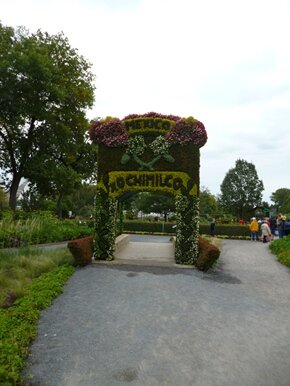 Xochimilco is composed of a network of canals and artificial islands, floating gardens known as chinampas. The site lies on the bed of the vestiges of Lake Texcoco, a lake that covered the entire region long ago. Photo: © ProvinceQuebec.com