Water buffaloes are animals both rare and plentiful There are an estimated 170 million water buffaloes on the planet.
Yet these animals are on the endangered animal list, according to the International Union for Conservation of Nature. Why are they considered in danger?  Because the water buffalo population is almost entirely domestic. In reality, the planet can count on only 4,000 wild water buffalo, located in Southeast Asia.

Extirpated from Laos and Vietnam, it is now rare in Thailand. At most, there are only about 50 in the Huai Kha Khaeng Wildlife Sanctuary.

Poaching is one threat to wild water buffaloes; the proximity of their domestic cousins is another. The latter carry diseases and could also permanently change the gene pool of the species if wild and domestic animals were to interbreed.

Wild water buffaloes have two huge saber-like horns on either side of their heads, with a tip-to-tip span of more than 2 meters. In Thailand and Cambodia, water buffalo horns are rather straight, while those in India curve inward. 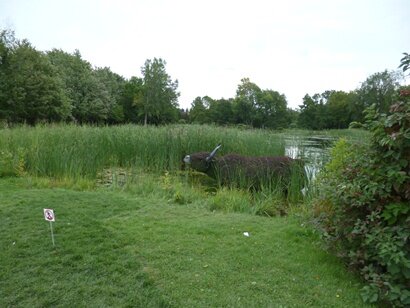