A work representing the ward of Shibuya, Tokyo and created by Mosaïcultures Internationales de Montréal.

In real life, Hachiko, an Akita Inu, belonged to one Hidesaburô Ueno, a professor at the Imperial University of Tokyo. Each day, Hachiko would accompany his master and friend to the Shibuya train station and patiently wait for him there until his return from work later in the day. One day, Hachiko’s master died at work of a cerebral hemorrhage.

Despite this, Hachiko, whom the Japanese nicknamed “the Loyal Dog”, went on waiting for his master at the train station every day for the next 10 years. To the Japanese people, Hachiko has come to embody loyalty. A statue in his likeness has been erected near the exit of the Shibuya station.

The piece Hachiko, the Loyal Dog is inspired by a true story and is a good illustration of the strong bond that often arises between a human being and an animal. Hachiko inspired two films, one of them being the 2009 Hollywood production A Dog’s Tale. 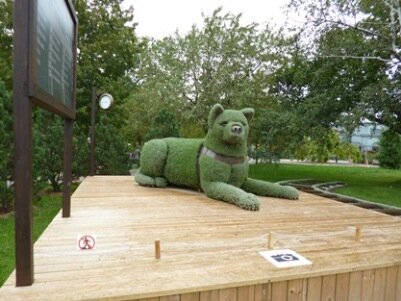 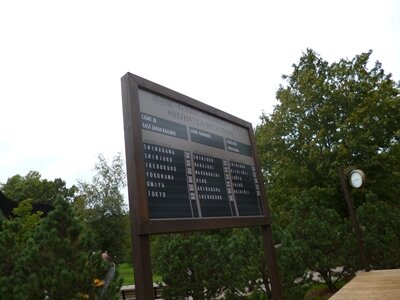 Hachiko, whom the Japanese nicknamed “the Loyal Dog”, went on waiting for his master at the Shibuya train station every day for 10 years. Photo: © ProvinceQuebec.com