Nanuk is the Inuktitut name for the polar bear. The bear depicted here was inspired by the sculptures of dancing bears made by the Inuit artists of Cape Dorset, Nunavut. The artwork created by Mosaïcultures Internationales de Montréal.

The dancing bear is a recurring image in Inuit sculpture. He symbolizes at once the joy and burden of life. As he weaves his dance, the polar bear is utterly and passionately in the moment, his nose held aloft both to sense the weather and to express the sheer ecstasy of living.

Balancing precariously on one of his large paws, he readies himself to stomp the ground as hard as possible in an affirmation of joy.

The polar bear’s eyesight is not too good, and so his dance is not meant to be seen as much as the extremely loud thud of his paw is meant to be heard. The bear is happy that the drift ice beneath his paws resonates with his joy at being heavy, for this same weight informs his everyday existence. The bear is heavy as a result of being truly alive, and he wants to communicate this through his dance.

Through his dance, the bear tells us: “My dance expresses the joy inherent in the burden of life, the responsibility of life, and yet I am still so clumsy and such a flawed dancer that I risk falling and crushing you with the weight I must bear. But despite my fear, let us dance, each in his or her own manner. Life must express itself!”

The glacier is melting, hence the water spurting out from beneath Nanuk’s paw.

The work’s poignancy lies in Nanuk’s performing his dance of Life even as his own life is threatened by the melting of the ice caps!

The bear’s dance is a manifestation of the enormity of his joy, of the happily assumed responsibility that comes with achieving equilibrium in life. It is an affirmation of the world’s perpetuity through the absolute that is life, even if life involves death. 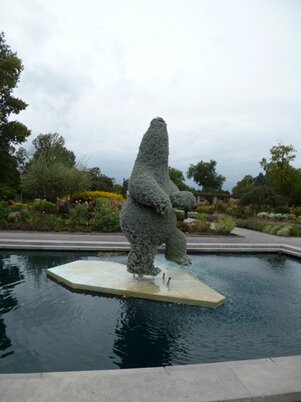 Through his dance, the bear tells us: “My dance expresses the joy inherent in the burden of life, the responsibility of life… Image : © ProvinceQuebec.com 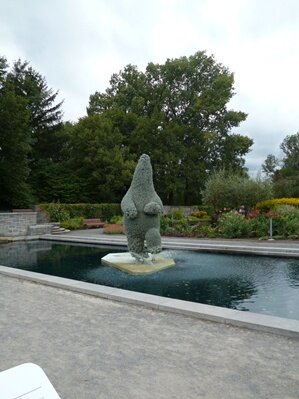 … and yet I am still so clumsy and such a flawed dancer that I risk falling and crushing you with the weight I must bear. Image : © ProvinceQuebec.com