Man of the Forest: Orangutan

Man of the Forest: Orangutan

Man of the forest – Orangutan was presented at the Mosaicultures Internationals by the island of Borneo, Malaysia, a Treasure Island

Like many other large islands around the world, Borneo has a distinctive biodiversity. Approximately 44 mammal, 37 bird, and 19 fish species are endemic to the island and are found nowhere else on Earth; and this doesn’t include the thousands of species that it shares with other islands in the area.

This great biodiversity is a result of its tropical climate and dense forests. Up to 1,000 different animal species were once counted on one tree alone, the majority being insects.

The orangutan is the largest arboreal mammal. 46% of its day is spent foraging for food, 39% sleeping, and the remainder is divided between traveling around and building its nest, which is constructed anew every night.

Orangutans are an integral part of this biodiversity. Two species exist: the Bornean and the Sumatran. The word orangutan comes from the Malay and Indonesian languages and means “man of the forest”.

Unfortunately, the survival of orangutans in nature has been seriously threatened by the development of human activities, particularly deforestation. About 80 percent of the orangutans’ habitat has been deforested in the past 20 years. Researchers from the Wildlife Conservation Society predict that most of the orangutan population will be extinct within ten years. 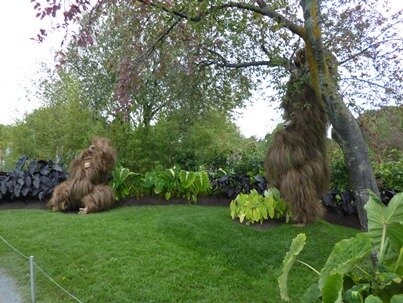 The orangutan is the largest arboreal mammal. Photo: © ProvinceQuebec.com