This work was conceived in Atlanta City. As with all amphibians and other fragile organisms, frog populations are in decline all over the world.

Frogs come in all sizes. The world’s smallest frog was discovered in 2012 in Papua New Guinea and is 7 mm long. The largest frog is the Goliath frog, found in central Africa. Its body length can be thirty centimetres.

Habitat destruction, deterioration of the ozone layer, chemical pollution, as well as a certain disease caused by a fungus, called chytridiomycosis, all threaten the extinction of more than a third of the species.

In an effort to help save one frog, the Gopher frog, the Atlanta Botanical Garden began a program to reintroduce this animal into a protected area. There have been 2000 amphibians released into nature since 2007. Gopher frog, Marsupial frog, Leopard frog and Lemur frog (this one is a tree dweller) were featured on Mosaicultures Expo in Montreal.

The Earth is home to approximately 4740 species of frogs. According to the International Union for Conservation of Nature, nearly 1900 frogs are endangered. Since 1980, close to 120 species of amphibians have become extinct. Normally, extinction threatens a species every 250 years. 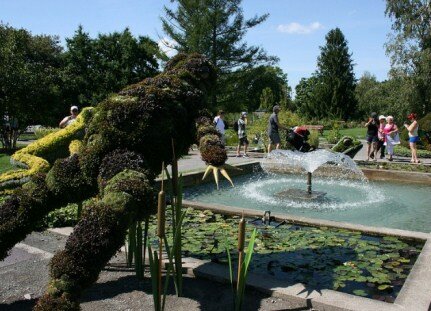