The spectacular Canyon Sainte-Anne is the result of a combination of factors acting over hundreds of million years since the Preecambrian Age, about 1 billion years ago, when hard roch formed the canyon’s walls. The river Sainte-Anne-du-Nord still continues its patient sculpture work and the canyon is 74 metres high, today.

One of the first newspapers in Quebec, Quebec Mercury, said in 1840 that the Canyon of Sainte-Anne represented North America’s most beautiful falls after Niagara and that’s the plain truth. The canyon was painted by famous painters, such as Kreighoff and described by American philosopher and environmentalist H.D. Thoreau, in 1850. John Travolta filmed his Battlefield Earth here, in 2000

The exploration of canyon is done by using the viewpoints as well as its three suspension bridges. The first bridge is located at the head of the fall, the second one is at 60 meters (180 feet) above the Sainte-Anne river and the third one is in the bottom of the canyon, over mini waterfalls.

Many activities for tourists are available on the site of Canyon Sainte-Anne. No doubt, everyone in the family will find something to love about this spectacular environment unique in Quebec, which offers many scenic overlooks. 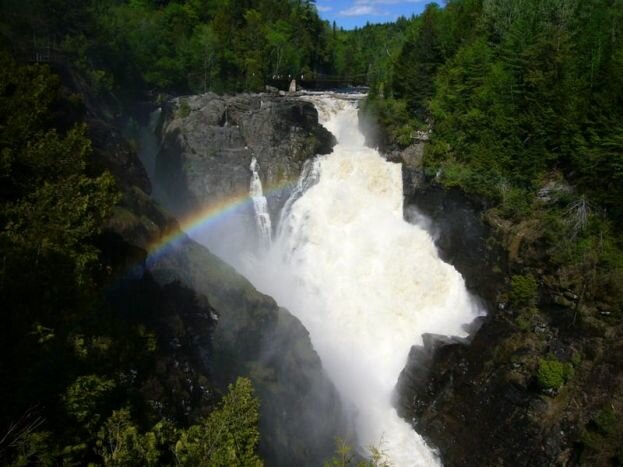 The visit is by foot along the path that guides you through both cliffs of the canyon. Canopy Canyon Adventure circuit is the most thrilling safety cable discovery tour in Quebec.  The trail is safe and secure, easy for the entire family

Besides, the so called Stone stories invite you to enter the forest and encounter a fantastic world of mythical stone characters. Inyan, Salamander, and Medusa are some of the hosts who will introduce you to beliefs about rocks from around the world.

A restaurant, a gift shop, picnic areas, special equipment for your tour, plenty of free parking are available for the tourists. Visitors should remember that dogs must be kept on leash!